Customer was experiencing high noise and variable frequency drive interference making any measurement difficult near cooling towers. In addition, no gearbox readings could be taken while in operation, while manual motor readings could only be taken every few weeks.

Novaspect engineers implemented three wireless vibration devices on a cooling tower enabling readings to be taken every 30 minutes. This allows integration services to supply data to a Distributed Control System (DCS). The Emerson wireless HART worked where competitor’s systems failed. When the concept of introducing wireless to the plant was first proposed, the customer was skeptical.

Historically, this power plant had installed a competitor’s DCS, controls, instruments and even tried their version of wireless without success. Novaspect brought in our subject matter expert to explain the differences between Emerson Wireless HART and its imitators. After explaining how the network was different than what they had used before, the customer agreed to a trial for the right application.

One plant engineer challenged us to take vibration measurements on their cooling towers which have historically had so much noise and interference from variable frequency drives (VFDs). Neither the competitor’s wireless or wired solution were able to communicate out of their gearbox and motor areas. The initial installation and test was successful, but the customer still doubted the measurements in view of their past experiences. However, after double checking the data with handheld measurements, they found the readings to be dead-on accurate.

In addition to saving costs on installation and maintenance, the system mitigates the falling hazards to personnel taking manual measurements during winter weather.

An initial estimate indicates the customer saved roughly $18K in costs by installing wireless instead of a wired system. Plus, they also recognized having this data will allow them to better predict a problem with a tower before it forces them to runback their generation capabilities, especially when a tower needs to be shut down quickly during summer peak demand. Now they are able to get updated gearbox readings in a timely fashion which were impossible during earlier tower operations. While in the past they limped along with manual motor vibration readings every few weeks, this data is now automatically read every 30 minutes. Thus, operators no longer have to risk safety incidents in winter weather, walking routes to take manual readings. 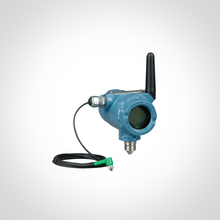 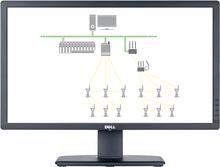